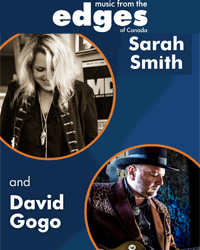 × The Tidemark Theatre is excited to present Speed Control and David Gogo, in partnership with Music From the Edges of Canada!

Hailing from Canada’s North in the Yukon, Speed Control is the rock band that can make you move even at minus 40! Described as “Super tight, riff heavy, harmony rock” (The Province, Vancouver Sun), Speed Control has a captivating sound with an energy that will leave you smiling, singing, dancing, and wanting more.

They’ve grabbed the opportunity to focus on writing and recording the fourth album during 2020 and 2021, releasing two singles to date - Inspector Tang and Headlights with two more due out before the onslaught of another Yukon winter and a spring album release.

When not touring, David Gogo lives on a Christmas Tree farm on Gogo Mountain, just outside of Nanaimo BC, Canada.