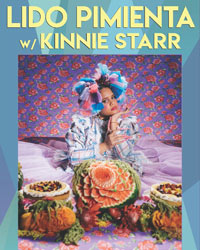 Supported by the Government of Canada and BC Arts Council

This event takes place on the traditional unceded territory of the Ligwiłda’xw people: the We Wai Kai, Wei Wai Kum, and Kwiakah First Nations.

Afro/Indigenous/Colombian/Canadian/punk/folklorist/traditionalist/transgressive/diva/angel. There are so many layers to Canadian-Colombian singer Lido Pimienta’s identity that you might get lost in them. But if you did, you’d be missing the point.

Her multi-textural, mind-bending voice and music project what Canada’s The Globe and Mail called her “bold, brash, polarizing” persona, which constantly confronts the powers that be. But it also reveals an embrace of the Afro- and Indigenous traditions that is at once defiant, delicate and sweetly nostalgic.

Pimienta’s new album Miss Colombia takes her ecstatic hybridity to a new level, building on the “nu” intersection of electronica and cumbia established by her first two albums, Color, released in 2010, and the 2016 Polaris Prize-winning La Papessa as Canadian album of the year. The latter was the first 100% independently released, non- English or French album to win the $50,000 prize. Produced with Matt Smith, a/k/a Prince Nifty, Miss Colombia overflows with the kind of understated genius that promises yet another breakthrough.

As a Canadian global-beats trailblazer, Lido has an affinity for acts like A Tribe Called Red and Inuk throat singer Tanya Tagaq, but her work also resonates with British-Sri Lankan rapper MIA and she draws unabashed inspiration from the New York-bred Dominican-Trinidadian rap queen Cardi B. Miss Colombia has the effect of expanding the narrative about her dual Colombian/Canadian identity to her family’s mixed roots in the Afro-Colombian and Indigenous Wayuu communities, while establishing an ambitious new sonic palette that brings her closer to home.

The anti-star's Starr, Kinnie has made a career out of sidestepping the celebrity machinery. She keeps most of her activity behind the scenes and creates raw, intuitive material that straddles the lines between folk, rap, art-pop and poetry. Starr has worked in arts activism and mentorship with a focus on empowering indigenous and LGBTQ kids since 2006. She mentored through Canadian School Presenters Online and AMP Camp for a decade, and continues to mentor independently through Art Starts In Schools. Her style of teaching encourages self awareness and literacy through rhythm and a focus on clarity.

Kinnie Starr first entered the public eye in the mid nineties and was the subject of immediate bidding wars resulting in her signing with Mercury/island/DefJam (1997). 25 years later she continues to blaze her own influential trail. Born in Calgary and based in rural BC, Canada, Starr is self-taught musician and tri-lingual (spanish, french and english). She is a poet, speaker, songwriter and producer of Dutch/Mohawk, Irish and French descent, and has been interested in the nuances of society, liminality and penmanship since her teachers first noticed her love of history and cursive writing in grade 3. She was 8 years old.

Kinnie Starr was nominated for a Juno in 2004 as Best New Artist (she lost to Michael Bublé) and is acknowledged as a cultural icon by the Royal British Museum of Victoria, BC (2008). She won a Juno Award as producer for Digging Roots’ Aboriginal Album of the Year, “We Are” (2010). Starr is a published author and illustrator (How I Learned to Run, 2008, House Of Parlance) and was recognized as a pioneer in Canadian hip hop by Manifesto Hip Hop Summit in Toronto, alongside Michie Mee (2011).

Between 2011 and 2016, Kinnie Starr researched, created, executive-produced, co-wrote and hosted the feature film, Play Your Gender, which addresses the gender gap in the music industry. Directed by Stephanie Clattenburg, the film received the Edith Lando award in 2017, and was one of the top 10 docs to watch at the Melbourne Documentary Film Festival, 2017. The US premiere of the film took place in NYC in Feb. 2018, and the film went to South Africa, Oakland, Toronto, New Zealand and Siberia.

In 2015, Starr co-wrote two songs with The Julian Taylor Band, one which was used by the Toronto Blue Jays; “Just a Little Bit”, in their anti-bullying campaign. In 2016/2017, Starr created her latest album, FEED THE FIRE, co-written with Doug Romanow and released in 2018. She continues to co-write whenever possible, and in 2020 co-wrote the anthemic, THE BEST, with Amanda Rheaume. Starr is in writing and production currently with Maia Davies, Matthew Cardinal, Janet Panic, Caleigh Cardinal, and Sandy Scoffield.

Starr wrote the original score for Edge of the Knife, the first Haida language feature film, which won Best Canadian Film and Best British Columbia Film at VIFF 2018 and was one of TIFF’s top ten films that same year.

First 100 tickets to use the Early Bird Coupon Code WONDERMENT receive $5 off!