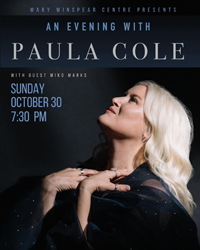 × Paula Cole is an American singer-songwriter who first gained attention with her triple-Grammy nominated album “Where Have All the Cowboys Gone?”. In 1998, Cole won the Best New Artist Grammy for her single “I Don’t Want to Wait”, which was used as the theme song on the television show Dawson’s Creek. Her most recent release titled “American Quilt” was released in May 2021. Besides recording and performing, Cole has also served on the faculty at Berklee College of Music since 2013.

Paula Cole has released seven solo albums of original songs. Cole has performed with icons in many genres of music, from Peter Gabriel to Dolly Parton, Herbie Hancock to Emmylou Harris, and Amy Lee of Evanescence to Burt Bacharach. Cole’s emotionally deep performances and her poetic, intelligent writing makes her stand out from the masses of contemporary music. Her compositions have been covered by a diverse range of artists—including Hancock, Annie Lennox, Katherine McPhee, and JoJo—and she has sold approximately 3 million albums. As the first woman in history to solely produce and receive the Best Producer Grammy nomination for her album This Fire, Cole has broken boundaries with a searcher’s spirit. From her top 10 hits of the 1990s to her more recent, critically acclaimed albums, Cole continues to write, produce, record, and perform heartfelt, meaningful, lasting music that defies categorization.