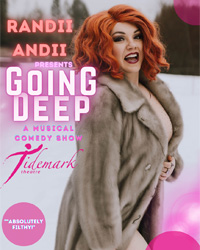 × Randii Andii is a musical comedian with a brilliant mind and a dirty mouth, known for her parody songs and elaborate costumes. She’ll have the audience laughing out loud, screaming for more and perhaps needing a cold shower. After Randii Andii, you’ll never be able to listen to your favourite songs the same way again.

“Your show is such a blast and we'd totally have you back again!” Julian Kramer, General Manager at House of Comedy, BC

Randii Andii is a musical comedian, known for her provocative parody songs and show stopping costumes. She started performing in 2005 alongside drag queens and has always followed the drag rule of ‘more is more’. She has toured the United States and Canada, performed in international festivals, had an entertainment residency at Temptations Resort, in Cancun Mexico, she spent 3 years working for Carnival Cruise Lines as part of the Punchliner Comedy Club. Randii Andii released an album in 2012, ‘Randii Andii – In Your Face’. She has performed on stages to 10,000 people and 2 people. Randii Andii likes to combine many different art forms into her show to take you on a journey that gets more twisted with every song, a 60 min musical comedy extravaganza that is sure to tickle your funny bone.