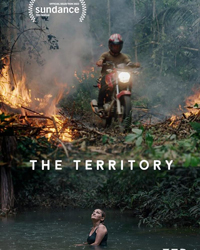 × Partially shot by the film’s subjects and filmed over the course of several years, director Alex Pritz’s feature documentary debut follows the struggle of the Uru-eu-wau-wau people as they defend their land from deforestation.

Today, there are fewer than 200 people living in the Uru-eu-wau-wau community. The Territory follows how this small group of mighty land defenders protects the sovereignty of more than 18,000 square kilometres of rainforest from non-natives who seek to exploit it. Bitaté Uru-eu-wau-wau, a young Indigenous leader, and his mentor Neidinha Bandeira decide to try a new tactic to protect their land and community: they create their own news media team to reclaim their story, risking their lives to expose the truth.

What follows is an arresting look at the tireless fight of the Uru-eu-wau-wau, and the ever-present dangers of exploitative expansion and colonialism. With its on-the-ground approach to documenting the conflict, the film is notably propelled from sequence to sequence with apocalyptic urgency. Featuring breathtaking cinematography of the landscape as parts of the Amazon rainforest burn, The Territory offers insight into the precious — and precarious — ecosystems under threat, a pulse-pounding example of film as activism that will keep audiences at the edge of their seats.

“In just 83 minutes, Pritz guides us through a complex story, though at its heart it is a deceptively simple tale of underdogs fighting to protect their land and way of life.” -Katie Walsh, The Wrap