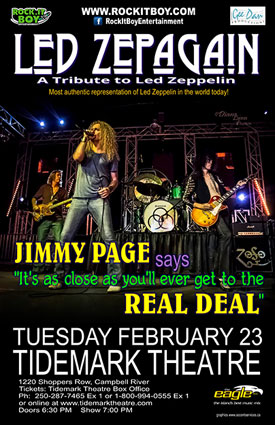 × LED ZEPAGAIN captures the heart and soul of “the world’s greatest band”, replicating the ultimate Led Zeppelin experience. Jimmy Page says, "It's as close as you'll ever get to the real deal". From the high energy electric classics to the beautiful acoustic works, you will be mesmerized as LED ZEPAGAIN resurrects Page’s soaring guitar leads, Jones’ brilliant keyboard passages, Bonham’s trademark pounding rhythms and the signature Robert Plant vocals. As you experience immortal classics “Stairway to Heaven”, “Immigrant Song”, “Whole Lotta Love” “Rock ‘n’ Roll” and “Black Dog”, you’ll believe Jimmy Page is right; LED ZEPAGAIN is definitely “as close as you’ll ever get to the real deal!”

Taking on the role of Jimmy Page is Jimmy Sakurai. His obsessive drive to perfectly recreate Page’s live performances delivers the real deal. This self-described “musical stalker” adheres to the philosophy, “Anybody can follow musical patterns, and everybody ends there, but for me, that is a starting point.” Diligent study of film and photo results in attention to the smallest of details. The result is utterly amazing!

Irish-born and cutting his teeth on contemporary rock, lead singer David “Swan” Montgomery delivers an uncanny portrayal of Robert Plant. Commenting on how much Swan looked like Plant, Roger Daltry recently pulled him on stage by for a duet rendition of "Help From My Friends". Swan has lent his voice to numerous recordings, including the widely released Witchblade Soundtrack, which featured such artists as G. Tom Mac and Roger Daltry.

Multi-instrumentalist Jim Wootten, nephew of the legendary guitarist Les Paul fills the demanding role of John Paul Jones, masterfully covering Bass, Keyboards, Mandolin, Acoustic 6 & 12 string guitars, and backing vocals. Having grown up in a family that was so musically inclined instilled in Wootten a love for music and inspired him to pursue his own dream of becoming a professional musician. Jim’s hallmark is his attention to detail.

Having studied drums and percussion with Carmine Appice, Joe Porcaro, and at the Berklee College of Music in Boston, Jim Kersey brings his amazing feel for the great, John “Bonzo” Bonham to LED ZEPAGAIN. This amazing drummer leaves audiences shouting for more after every performance of Zeppelin’s epic drum solo, “Moby Dick!”