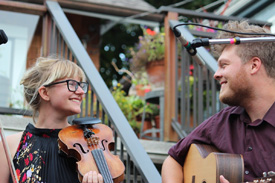 Iredale-Gray is a versatile guitarist and fiddler with deep roots in Irish traditional music and a commitment to innovation. He is a founding member of critically acclaimed Canadian indie-folk band Fish & Bird. His writing style draws on the formative Irish sessions of his youth in Victoria, as well as contemporary folk, jazz and pop influences such as Oliver Schroer, Brad Mehldau, and Bon Iver. His tunes have become part of the standard repertoire in Western Canadian fiddle circles.

Fiddler and Hardanger fiddle player Elise Boeur draws from the wells of Norwegian and Swedish fiddle music, melds in fistfuls of arcane influences, and emerges with a multi-faceted sound grounded in Nordic traditions.

This will be a rare opportunity to hear their roots come out in a duo setting, as they dig into tunes on hardingfele, guitar, and raging twin fiddles.

Tickets:  $22 Admission, Under 12 FREE with ticketed adult! (available through the Box Office only) (+applicable taxes & fees)