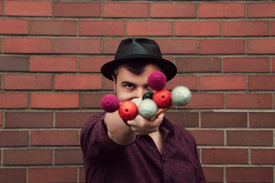 × Highway 19 presents award winning percussionist and composer Robin Layne leading this energetic quartet on the marimba. The instrument originated in Africa and made it's way to Latin America via the slave trade before being incorporated into jazz and classical music in the mid-20th century. Layne's study of the instrument has followed that path back from Los Angeles to Cuba and Mexico, to West Africa, but his virtuosity is all his own. Known for his collaborations with a wide spectrum of folk and world artists across Canada, including Locarno, Mazacote and Juno Award winners such as Quique Escamilla, Celso Machado, and the Paperboys, with the Rhythm Makers he and his instrument are front and centre in a high-energy exploration of the traditional and the modern. Expect a blend of Latin jazz, Mexican folkloric, and Global-fusion with the marimba taking centre stage.

Layne's debut solo album "Memories" was released in 2018 on TrebleFive Records. He has toured in China, Europe, Mexico, the US and Canada, but this will be the groups first appearance in Campbell River.