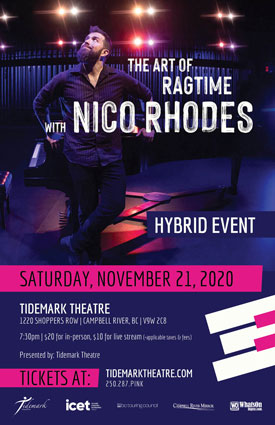 The Art of Ragtime

× Few Canadians know anything about Ragtime beyond Scott Joplin’s soundtrack to the movie 'The Sting'.  Composer and pianist Nico Rhodes takes us on an intriguing musical journey through the evolution of Ragtime from classical to contemporary,  featuring the rags of its best known proponents and little known stars.

Who knew Debussy and Stravinsky composed pieces based in ragtime? In their time, a formal classical music so rhythmically punctuated was highly unusual. The Italian word in classical music is ‘alla zoppa’ meaning ‘limping’ but the English translation ‘driving notes’ captures it better.

Ragtime was an ethno-syncretic intersection of African and European culture that shaped the musical landscape of popular music in North America for the following century. Taking its inspiration and unique character from the melodic and rhythmic vivacity of Afro-American folksongs and dances, it was birthed in honkytonks and brothels, the only places black musicians were allowed to play. Ragtime’s influence can be heard in contemporary rock, blues, jazz and classical genres, despite an evolution hindered by prejudice against both the form and its performers.

In 1916, Opera Magazine wrote: “Ragtime has carried the complexity of the rhythmic subdivision to a point never before reached in the history of music.”   One hundred and one years after Joplin’s Maple Leaf Rag was copywritten, Nico brings the music he originated back into the limelight.

At 29, Nico Rhodes is in constant demand as arranger and musical director for long run stage shows, when not touring with his own jazz trio or his mother, internationally renowned chanteuse Joelle Rabu. Nico was honoured with the 2019 City of Nanaimo Emerging Cultural Leader Award.