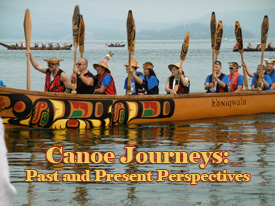 × “Canoe Journeys: Past and Present Perspectives” will explore the resurgence of the indigenous canoe culture through an evening of film and discussions.

The great ocean-going canoe sustained the cultural and spiritual traditions of coastal indigenous peoples for thousands of years. Starting in the 1980s the canoe culture, which was almost lost, has undergone a remarkable resurgence. The indigenous peoples of the Pacific Northwest have embarked on an emotional voyage of rediscovery.

In carved canoes, made from cedars that were living hundreds of years before Europeans arrived in the Pacific Northwest, in 1993 they embarked on a remarkable journey paddling hundreds of kilometres along coastal waterways to a gathering of more than three thousand people at Bella Bella, Qatuwas. Today these coastal-wide tribal canoe journeys are a catalyst in Indigenous cultural revitalization and means for community healing and youth empowerment.

A feature of the evening will be the 1997 film by Barb Cranmer Qatuwas – People Gathering Together which powerfully documents this rebirth of the ocean-going canoe and celebrates the healing power of tradition and the resurgence of Northwest Coast indigenous culture. Also featured will be the 2021 film Journey, Resurgence of the Ocean-Going Canoe which focuses on the Journey and youth voices. This film was produced by the Qatuwas Committee who have also developed the travelling exhibit Sacred Journey on display at the Museum until November 7th. An in-panel discussion will round out this evening event.