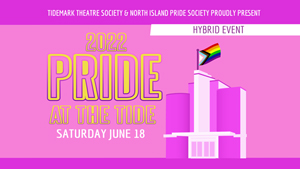 PRIDE at the Tide

× The Tidemark Theatre and North Island Pride are excited to present, PRIDE at the Tide - Campbell River's 2022 PRIDE party event!

The Queen of East Van, Isolde N. Barron, is back alongside her Baddest B!&@h, Peach Cobblah, to host a hybrid pride experience. Celebrations will kick off with an interactive drag show and a guest performance by Valley Girls Dance, followed by a dance party with special musical guests, Queer As Funk! Join the celebration in person at the theatre, or purchase a live stream ticket and enjoy from the comfort of your home.

Vancouver's hottest dance band is coming to the Tidemark Theatre! Infectious grooves with powerhouse vocals, tight horns and rhythms that just won't quit, Queer As Funk's repertoire ranges from beloved funk, soul and Motown classics, to contemporary pop favourites that will have you on the dance floor all night long. There's nothing this tight-knit band of talented musicians love more than performing together and that love is palpable to audiences everywhere. Their shows always sell out so get you tickets early!

"There's nowt so queer as folk", or so the old English adage goes. Queer As Funk believes in celebrating differences, and what better way than with a big ol' dance party?

Originally from South Africa, Cameron is a Vancouver-based director, producer and drag queen. As The Queen of East Van, Isolde N. Barron, she hosts The Barron Gurl Show every week in Vancouver's West End, as well as Drag 101, a monthly show at UBC’s Pit Pub. As the Queen Mother of the Cobalt, a space she helped transform into a vital queer hub, she hosted her own weekly show Apocalypstick for two years and was a monthly fixture at Queer Bash, East Van's premiere queer dance party. She is currently the head judge ushering in new talent for the Mr/Miss Cobalt Competition, in its 7th year.

In boy form he produces & curates Club PuSh for the PuSh International Performing Arts Festival and is founder and Managing Artistic Director of Zee Zee Theatre celebrating their tenth season. He is a critically acclaimed director and graduate of Studio 58 who further trained with Pochinko clown master, John Turner.

Peach Cobblah is known as the Baddest B&*#h of Vancouver. With her wife Isolde N. Barron she co-created Tucked & Plucked: Drag Herstory Live Onstage which has appeared extensively over the past six years. Peach created and for the past four years has hosted Shame Spiral, a devilishly regretful weekly drag show at 1181 in Vancouver’s West End. She also helped revive the queer East Van scene with events like HUSTLA, the city’s original queer hip hop event, The Gay Agenda: Glitter & Skin, a monthly party celebrating all forms of masculinity, the annual Mr/Miss Cobalt Drag Competition, Eye Roll: Another F$%*ing 90s Party, and Limp Wrist, celebrating queer icons. She can be seen sweating and swaying all over town in her monthly and pop-up events like Drag 101 at UBC and Queen, Eggs, and Ham, a delicious an devilish brunch show. She appeared as Hanna the Dominatrix in The Vancouver Playhouse’s final production, La Cage Aux Folles. Out of drag Peach is known as award-winning playwright Dave Deveau whose plays have been touring Canada and the US for the past six years.