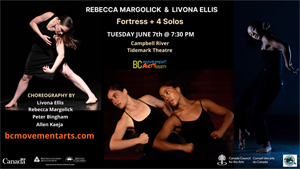 FORTRESS + 4 SOLOS – an evening of solos and duet

The explosive talents of these bright young female artists, BC based Livona Ellis and NYC based Rebecca Margolick, are  showcased in an evening of solos and their first collaboration, a duet titled Fortress. Ellis performs her pensive solo Unmoved, a deeply felt response to the idea of overcoming the limitations we place on ourselves. Margolick’s solo Bunker hums with energy, drawing on themes of memory and the shared history of previous generations of women. The program also includes two solos revived last season specially for them: Peter Bingham’s 1997 Woman Walking (away), danced by Ellis with exquisite simplicity and focus; and Allen Kaeja’s Trace Elements (2000) powerfully performed by Margolick, a passionate call to learn from the mistakes of our past.

LIVONA ELLIS Livona Ellis was born in Vancouver on the unceded Coast Salish Territories. She completed her training at Arts Umbrella under the direction of Artemis Gordon. In 2010 she received her Dance Diploma and began dancing with Ballet BC.  Throughout her years with the company she has been fortunate to perform works by world renowned artists such as Crystal Pite, Sharon Eyal, Lesley Telford, Johan Inger, William Forsythe, and many others. Livona has performed in international venues such as Sadler’s Wells, Movimentos Festival Wolfsburg, Jacob’s Pillow Dance Festival, Fall for Dance NYC, and International Dance Festival Birmingham UK.  She has created works for Dances for a Small Stage, Dance Deck Trois, Public Salon 2019, Contemporary Art Gallery Gala 2018, and Arts Umbrella Season Finale. In 2017 she received the Vancouver Mayor’s Arts Award for Emerging Artist.

Livona rejoined Ballet BC for their 2020/21/22/23 seasons and is currently on faculty at Arts Umbrella.

REBECCA MARGOLICK is a Canadian dancer and choreographer based in New York. Her multi-disciplinary and solo works have been presented in France, Costa Rica, Singapore, Poland, Bulgaria, Israel, Mexico, Germany, and multiple cities across the U.S and Canada. She was named one of Top 25 to Watch in 2021 from Dance Magazine. Her currently touring solo Bunker + Vault won the Jury Prize for “best indoor choreographic work” at the 2019 Festival Quartiers Danse in Montreal.

She has received Fellowships to choreograph at the Alvin Ailey School and the the Conney Conference Fellowship at the 92nd St Y in NYC. She was a GPS Fund Movement Research Artist in Residence at Derida Dance Center in Sofia Bulgaria, and was a  LABA Fellow at the 14th St Y in NYC.

She is currently rehearsal director and dancer with Chuck Wilt’s UNA Productions, and was a dancer with Sidra Bell Dance New York from 2012-2016.

Rebecca graduated from New York University’s Tisch School of the Arts with a BFA in Dance, and prior to that trained at Arts Umbrella in Vancouver.

Sointula, BC – The BC Movement Arts Society (BCMAS), based in Sointula on Malcolm Island, British Columbia, located within the unceded Kwakwaka’wakw territories of the ‘Namgis, Kwakiutl, and Mamalilikala Nations, is excited to launch its new North Island Contemporary Dance Series featuring Canadian and international dance artists. Bringing urban and rural together, BCMAS is one of the few professional dance organizations based in, and serving, rural and remote communities in Canada.

BC Movement Arts is led by former professional dancer Mary-Louise Albert, the former Artistic Managing Director of the Vancouver based international Chutzpah! Festival and Norman Rothstein Theatre from 2004 to 2019. Now based full time in Sointula, Albert, along with a team of Advisors and dedicated Board of Directors, is grateful to be in the position to add this new annual presentation series, as well as multi-week dance creation residencies, providing unique opportunities for professional dance artists and supporting the cultural and economic growth of rural coastal BC.