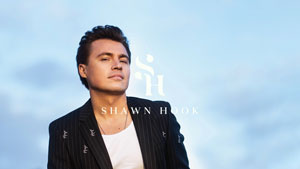 × Shawn Hook began his musical journey at a very young age, learning piano, bass, and trombone, singing in a choir, and enrolling in music composition class in high school. Born Shawn Hlookoff in South Slocan, British Columbia, he started college as a geological engineering major before committing full-time to music. He transferred to the Art Institute in Vancouver, studying audio engineering and playing in a disco cover band called Shag. In 2020 Shawn released his debut single ‘I Don’t Wanna Dance’ on ULTRA records. A multiple JUNO Award-nominated artist with hundreds of millions of streams to his name, Shawn has collaborated with some of the industry’s biggest hit songwriters, also sharing stages with the likes of The Weeknd, Shawn Mendes, The Chainsmokers, and Camila Cabello amongst others. He is best known for tracks ‘Sound of Your Heart’ and ‘Reminding Me’ with Vanessa Hudgens which have become Double Platinum and Platinum-certified. As busy as ever, recent TV appearances include Good Morning America, Today Show, Jimmy Kimmel Live and So You Think You Can Dance suggest there’s no plans to slow things down anytime soon. One of the most successful Canadian artists of the past few years, Shawn Hook’s undeniable combination of slick vocals, touching lyrics and tight production sees him deliver yet another memorable hit.