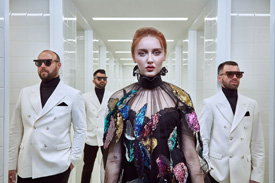 × Due to a scheduling conflict, the performance for The Lost Fingers has been rescheduled to Sunday, May 10th, 2020. Tickets for the April 18th concert will be honoured for the May 10th date. Those who cannot attend May 10th may get refunds until March 13th at the Tidemark Theatre Box Office, either by phone or in person. The Box Office is open 12-4 pm Tuesday through Friday. We deeply apologize for any inconvenience and disappointment.

By exercising remarkable musicianship, heavenly vocals and creative arrangements, along with a keen sense of humor and eccentric fashion, this quartet transforms pop/rock music classics performed in a Django gypsy jazz style with a hint of blue grass. Their creativity and virtuosity allows them to take the listener on a entertaining music journey through everything from AC/DC to Stevie Wonders to Michael Jackson to Deee-lite to Kool and the Gang to Stromae. This is a remarkable, high energy and fun show is designed for music lovers, pop-culture aficionados, and even conservative jazz experts.

The Lost Fingers have sold over 400,000 albums across the world and have a Canadian double-platinum selling “Lost in the 80′s” album and a gold selling “Rendez-vous Rose” album under their Tiger of Sweden sponsored belts. They’ve toured Canada coast to coast, and performed in over 22 different countries such as the US, Russia, France, Spain, Lithuania, Turkey, United Emirates, New Caledonia and Colombia to name a few. They’ve shared the stage with a long list of top-selling artists, most notably Celine Dion, when they performed together on TV’s Star Academie.

They have also collaborated and performed with respected jazz/studio musicians such as the be-lated George Harrison’s favorite guitarist Robin Nolan, Elton John’s band leader/guitarist John Jorgenson and the guitar virtuoso, Andreas Oberg to name a few.

Their show, Wonders of the world, is a concert that includes hits such as Black Betty, Venus, I Just Died in Your Arms Tonight, Groove is in the Heart, Love Fool, Hit'em up style (Oops!), and Turn the Beat Around, all tracks from the Lost fingers’ last album. In concert, the group will also offer unique bonus arrangements of Daft Punk, Anna Kendricks, Earth Wind and Fire, and Gun's and Roses. Energy, swing, smiles, humor, musicality, virtuosity and costumes will be at the rendez-vous!